Boy that would have been an embarrassing error for me to make! Good thing my original post SAYS The Swapper, I edited the post, true, but that was for some typo or other. COMPLETELY unrelated. Nothing to see here. Moving on...

The Swapper - great puzzle game! Not too long, inventive puzzles, evocative atmosphere.
I have never heard about that game before. Looked it up. Apparently already in my Steam library. Wellwhatdoyouknow!

Me too. It was probably in some Humble Bundle.

Here are some of the problems I'm having with HL2:
- not immersive or scary, because the texture res and polygon counts are low. For example head-crabs should be creepy and terrifying but they just look goofy and annoying.

I just completed (again, for achievements) Half-Life 2 and Half-Life 2: Update. The latter enhances lightning and has a commentary mode. One of the commentaries is that monsters are by design not meant to be scary, but rather gross and ugly.

I just completed (again, for achievements) Half-Life 2 and Half-Life 2: Update. The latter enhances lightning and has a commentary mode. One of the commentaries is that monsters are by design not meant to be scary, but rather gross and ugly.
Good news, you managed to get that in just before the 1-year anniversary of my post.

But seriously though, that's quite interesting.  For the record, I did post later that I ended up enjoying HL2, and played all the followups as well.

This was always my big fear as a freelance game reviewer for IMG- we didn't always have the luxury of playing through all of the game before the review is due. In practice I must have played through enough because my opinion of a reviewed game never changed drastically afterwards, but it was always a worry.

Baldur's Gate II. I've started that game so many times, and never played through it. Rolling characters and thinking "Aw, I should have made a [x] character instead!" after a few hours of playing is the shiat!

It is just awesome. BG I is my second all time favorite game, so...

A quick shout out for 'Dawn of Man' a Paleolithic-to-Iron Age sim/strategy game from the people that brought you 'Planetbase' (which is excellent).

I'm enjoying this a lot at the moment - it has the same care and attention to detail as Planetbase, but it may be too slow for the peanut gallery.

My journey through the 32-bit games on my hard drive continues.

Gone Home - The story had been spoiled for me long ago so its hard to say how much more I would liked it otherwise, but it was fine.

Darwinia - bought it again to get around Ambrosia's broken copy protection, played it through again. Unfortunately it stopped responding to commands when I was about to win, but restarting it fixed it, then it crashed while the ending was playing and I had to go watch it on YouTube. So that left a sour taste. Not how I wanted to remember the game, but oh well.

(FYI the Mac version on Steam is a WINE wrapper.  I had to edit the WINE driver settings before I could raise the resolution from 800x600. It also crashes if I play for more than an hour straight. Otherwise it's fine.)

I forgot how hard these old games can be! The game punishes you for going too slowly, punishes you for rushing forward, encourages you to read every log you come across, then ambushes you with wandering enemies while you are listening to logs. Health and ammo are severely limited. I find myself replaying each section over and over until I get a half-way decent result, then I save the game and try the next bit.

In the interests of saving time I think I am going to use a cheat code to give myself some spare health hypos. But I'm hoping to avoid needing the more drastic cheats.

Full Throttle Remastered: finally experienced this classic point-and-click adventure. The remastered graphics are a labor of love. Good stuff, though I got stuck a few times just because it wasn't clear the scene was partially offscreen. The mouse cursor doesn't tell you this, you just have to move Ben towards the edge and discover that the screen scrolls to reveal something that would have been perfectly visible to a character in that world. Stuff like that takes me out of the game.

System Shock 2 (continued): I think I'm almost halfway. It's a great game, but very old school. Lots of backtracking and searching. Constant inventory pressure. Weapons jam, break, and run out of ammo frequently. But I no longer have to compulsively replay every encounter to improve results, and my brain is starting to remember how to play at this slower pace. I'm enjoying it.

Total War: Warhammer 2: This may have been a bad mistake. I bought it in a Humble sale with the intent of playing it after I get a new Mac. Then, to make sure Steam gave Feral credit for that sale, I installed it on my work Mac to play it for 15 minutes. I ended up playing for many hours, and had to force myself to delete it.

If I'd realized how much like HOMM3 this game is I might not have bought it. I only got through maybe 1/10th of the HOMM3 single-player campaign. I loved it but it took so long. and I could tell it would take me many more weeks to get good. TW:WH2 feels similar. I have little expectation of getting through the full campaign even once. The map is frickin' huge. I wish it came with some smaller campaigns.

The battles are so pretty though. Maybe when I get a new machine I'll play the game's battle sandbox instead of the campaign.

After the enhanced version of the original Borderlands came out, I took the opportunity to start a new playthrough and finished the main campaign on the weekend. I might have to stress that I haven't played BL1 too much in the last couple of years after BL2 and TPS came out. Short sessions here and there, but never a full playthrough.

And boy, does the game seem bland now in comparison to its successors. Save for the last two areas, everything is uniformly drab grey and brown, with the same rock and trash textures everywhere, the missions are repetitive (even more so than in the other two games), and many of the characters are surprisingly forgettable. Even those who became a staple in series, like Marcus, Scooter, and Tannis appear as if on valium.

Except for Claptrap. Claptrap always was annoying...

I mean, I still had a sufficient amount of fun, but the series really became a lot better with the sequels - and yes, I explicitly also mean TPS with that.

Interesting. I've tried to remember what I can of my BL1 playthrough, and there's really only a few snippits here and there to go on. And I can see I rated it 4/5, where as BL2 is a clear 5/5 for me (TPS was also 4/5).

Currently I am playing Baldurs Gate 2: EE when I have the time.. But most of my time is now being sunk into Civilization VI vanilla. Since I won the MGS draw in November, I though it was about time I tried it out, since I promised a review..

(Life in general, another kid, busy busy...) And I am enjoying it very much! Is it better than Civilization IV? No. The UI is pretty bad, and there are so many places where I think they skipped out way too easily. But hey, it is Civilization, so I am definitely in. Some very nice new features that I really like (And quite a few I dislike), so my just-oooone-more-turn-mantra has been horrible for me lately! I've slept way less than I should..

I've been indulging my fantasy alternate reality as a star gladiator.

System Shock 2: I finally finished it. Great game, a deserved classic. (Though the cut-scenes at the end are the wrong tone IMHO.) I hope to play one of Looking Glass's other legacies eventually, like Thief or Thief 2. Next up..

Assassin's Creed 2: Brotherhood (Xbox 360).  I first played this on Mac, got 15% in; eventually it stopped working. Later I played the Windows version until I got tired of Boot Camp-ing. Again, I got about 15% in. So this is my third attempt. I'm about (you guessed it!) 15% in. But i ordered my new Mac yesterday so I may be cursed to never finish this game.

... then realized I needed to find and install a hundred mods to get the game to 'working order'... which, if memory serves me poorly for skyrim, fallout 3, fallout nv, oblivion .... I have another 50 hours ahead of me before I can actually play the game.

I've hit 150 hours of Civ VI. I really have to write that review now.

Well, I deleted Civ VI. 200+ hours must be enough of that without having installed a single expansion.

Just finished up the main story of Trine 2. More of the same Trine, without any new features what so ever, so it felt more like a mediocre expansion pack to the first one. Story was very superficial and didn't add much, while gameplay and visuals were great as previously. The series is one of the most gorgeous looking games for sure. Also, I quite often ran into situations where I could only beat the game if I had a certain character still alive, which speaks of rushed game design. Never should you be required to kill of your characters and start over, just so you can get that one character back that is required by the level.

3,5/5. It did feel like a lazy attempt at a sequel without adding anything new, and I think I enjoyed the first one somewhat more, because it was more novel, and it did have a SLIGHTLY more fulfilling story. But I am still going to finish the included Goblin Menace expansion. 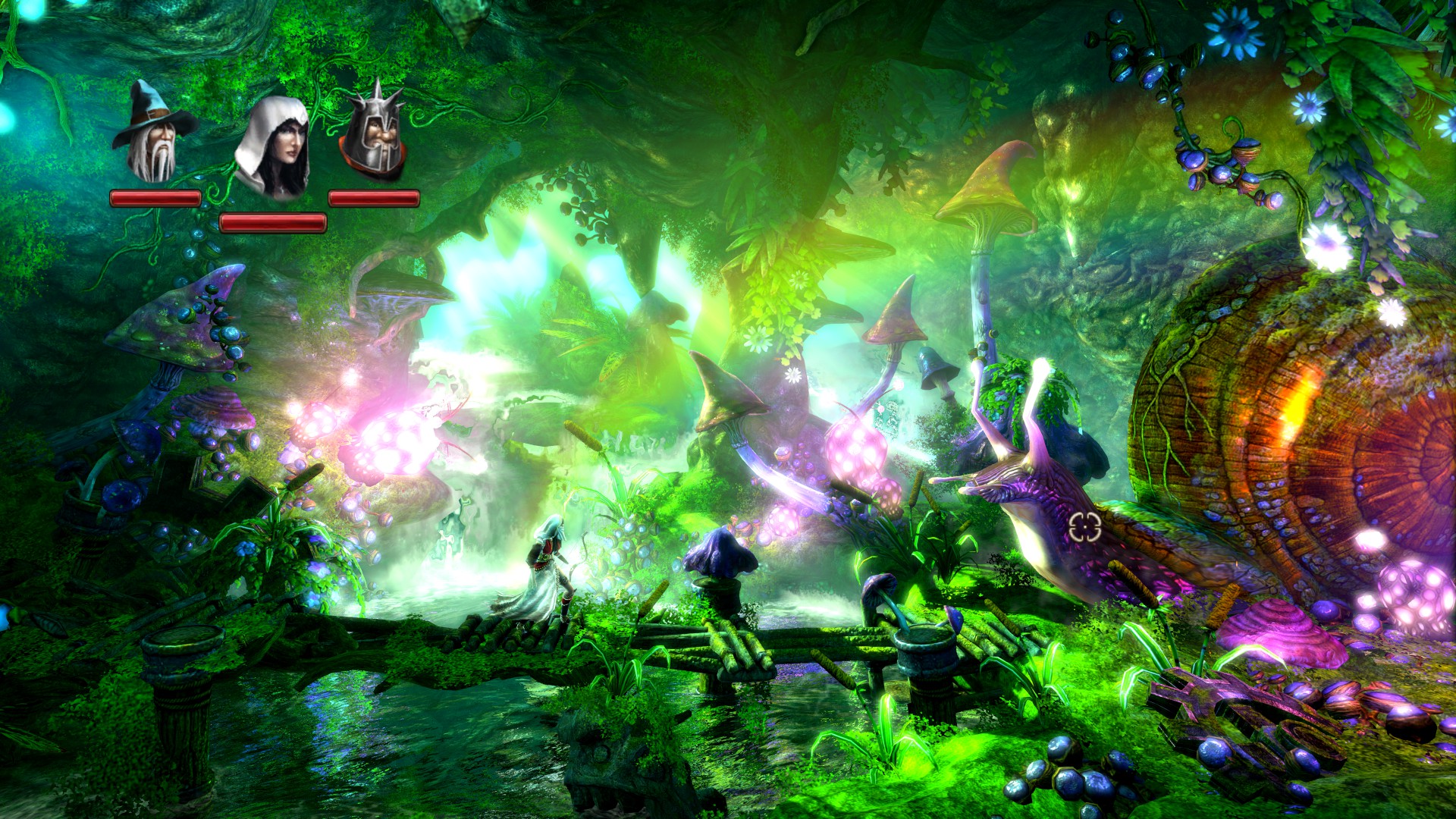 Im on the couch with a broken foot, so Im putting the gaming PC on hold and taking the opportunity to catch up on some old Mac games on the MBP.

Playing Pegasus Prime, the first Journeyman Project game (and a remake from the original 1994 version).  Only played the third back in the day. Time travel that doesnt feel like time travel, because all the destinations you go to are in the future. Easy puzzles. Weird control scheme that must have felt dated in 1997. If anything, its reinforced how the Myst series was so ahead of its time, for a long time. Still, some decent world building and I want to get to the second game, which addresses a lot of these issues. Ill have to WINE that one, though.