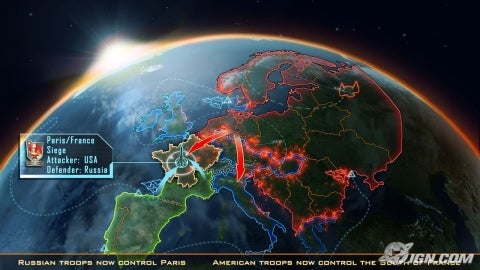 Its an MMORTS (with SP) which involves players fighting as either the EU, US, or Soviets to hold and invade territory on real-time. Its coming out in 2007 in Europe, whilst the US get a spring 2008 release date. Its for the 360, PC and PS3.
Seems very fun.

Here is the website where you can watch the awesome 'Tom Clancy style' trailer.
http://endwargame.us.ubi.com/

Edit:Oh and you can keep your units after battles (as long as they aren't wiped out of course) so they become more and more experienced. You can customize them etc...

i thought it was a RTS with a MMO style multiplayer available...

but it does look very very appealing. specially with the idea of getting in close to your troops. Hopefully itll be on a scale so that i dont feel that i have to zoom out further like i do in almost every single RTS except for Supreme Commander.

Edit:Yep I'm an idiot and its got SP too.

his FPS's, but the game itself looks pretty good