It belongs in a museum


7 replies to this topic

So I rescued this from the IT dumpster at work today.

It feels like it has a battery, but no juice (obviously), so I'll try and find a power supply to hook it up to. 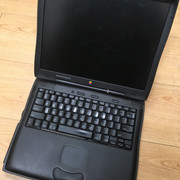 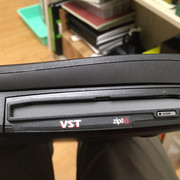 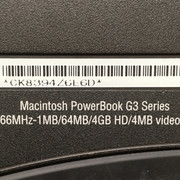 But holy crap it's heavy. I just carried it up the stairs and I need to sit down.

Nice. I have one that looks very similar, but the label has no specs, just says "PowerBook G3 Series". So I'm guessing yours is a later edition.
I don't feel like firing it up to get the specs, since it is so very slow.

Yeah I'm not sure what gen this is...Wallstreet Series II, perhaps.


Spoiler
In the movie, the character played by Jennifer Jason Leigh (Daisy) plays a song on the guitar - in this case, a 145-year-old Martin on loan to the production from the Martin company's museum.

After the song, Kurt Russel's character snatches the guitar and smashes it.

What Tarantino didn't tell anyone - Leigh knew because she knew she was playing the real instrument and not a stand in - was that he didn't call a cut and have it swapped.  Kurt Russel smashed a 145 year old, priceless guitar.

So yeah, that's a thing you know now.

Similar thing happened in Battlestar Galactica. Edward James Olmos smashed a wooden model of a ship his character had been building as a hobby. It wasn't in the script but he went with his gut during the take and it was a great moment. But he didn't know the thing was on loan from a museum, worth over $100,000.

Back on topic... I (or rather, my dad) had one of these, but it was the beefier 300mhz model (https://everymac.com...ook_g3_300.html ) with a DVD drive. It was the first DVD drive my family owned... I vividly remember watching Jaws on it and being terrified. I also remember playing the DVD version of Riven on it, at a time when DVD games were super uncommon. Not having to swap disks was great.

Aptly named, my first trades of my life were buying AAPL in 2001 on a PowerBook G3 WallStreet. I haven't kept all of my old Macs but some of them were so cool they made the cut; my WallStreet G3 is one. In fact I think I posted a thread a ways back about how I resurrected it after I unboxed it after a move to discover it was dead. Never did get the Transcend PATA SSD I got for it working though. I need to go back to it at some point... maybe the solution of getting an M.2 SATA to PATA adapter that worked in my PowerBook G4 Titanium would work on the PBG3.

I still have a stack of dead batteries for that WallStreet in one of my desk drawers in my office. It feels wrong to clear them out.

Aptly named, my first trades of my life were buying AAPL in 2001 on a PowerBook G3 WallStreet.
Ha, same here, even down to the year. I told a friend I'd never buy stocks outside of a mutual fund because I didn't want to spend time doing research. He pointed out that I had been following Apple very closely for over 15 years. So I bought a little in 2001. I hope like me you held on to some of it.

(I've only bought one other stock since then, actually.)