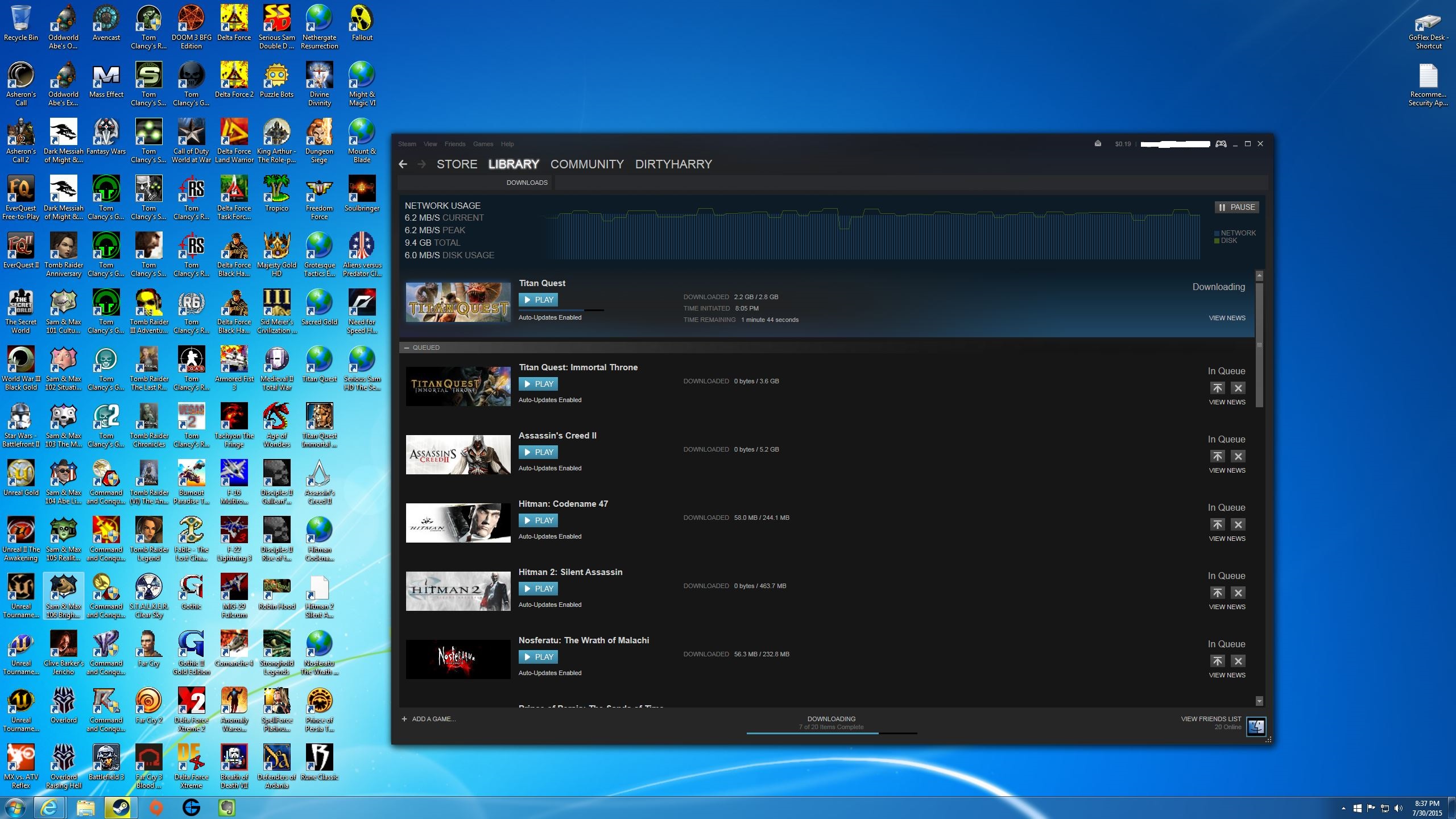 Just A Few Windows Games by Michael Lyons, on Flickr

Since I went through the hassle of setting up bootcamp (again!) and it was a hassle as usual but I persevered and overcame, etc. I figured I might as well download a bunch of games so there's plenty already there to pick from. I think I may have gone a little overboard here given I wound up downloading over 100 games and some of them are MMOs. LOL!!!

My dad always told me, "Moderation is the key." Poor dad. I would never listen and look at what has become of me here. He tried to help me but I just wouldn't listen. Now I do things like this.

My ISP is going to frown on this behavior as well since I exceeded my monthly bandwidth limit a wee bit, like by double. It's okay though. They are awesome actually. They give a warning first time (which this is) and then another one and then finally rather than do something wicked annoying little throttle your speed, they just charge you 10 bucks per either 50 or 100 additional gigs I think it is. I can live with that since this sort of excess is rare for me. Maybe what dad told me did sink in somewhat after all. I just forget sometimes is all.

There are some real gems here I've got in various deals and bundles, games like the original Delta Force? Oh, yeah. That's gonna be some fun. I got a cheap bundle of all things Novalogic on Steam one time because I wanted Comanche and a couple others and it was cheaper to just buy the whole thing. I figured I might as well fool with them for some fun before I toss them in the virtual bin. Anyway, quite an assortment of largely older titles I've been meaning to get around to forever so maybe I will now when I visit the wonderful world of winders.

I also installed Assassin's Creed II so I can play it where Ubi porked me on the Mac portage.

I posted this since I thought you guys might get a kick out of how crazy I am and believe me, I am crazy.

Are you crazy for downloading 100 games. Haha geez! I also keep my PC games on my PC's desktop (heck, it doesnt do anything else, so why not?? easy to launch from). But boy-o-man... I dont let the columns get beyond 3 =p you are just nuts.

PS: That sucks about your ISP doing bandwidth limiting.

I'm a spotlight wandows search man. Quicker for me to hit Open Apple Space or wandows key than search my desktop. So just delete all the shortcuts.

For me though, I specifically place games on the desktop where I expect them. Grouping like games in little clumps. Like, all six of those X games are together =p So I kind of know where to go, what to click on. The icon is always in the same place each time I reboot, so if I'm playing, say, asscrack II, I know where to send the mouse and doubleclick.

/me fires up game at 640x480 on Frigidman's machine forcing his icons to move.

Heh? Oddly... I've never had my icons shifted due to some new game deciding to launch in a lower res. I think Windows 7 really handles the desktop a LOT better than XP or others did.

Maybe it's because I have 2 monitors on the Basement PC but if I fire up some gog game that drops the res to like 800x600 it shuffles them all around.

Yeah, I'm thinking those icons gotta go. I just left them there initially because it struck me funny seeing them all, like, oh look what I did!

Windows icons are ugly too. They are small and particularly in the case of older games, pretty terrible looking.

Everything there is either in Steam or Origin (Command & Conquer!!) so it is easy to just use the client which needs to run anyway to fire them up. There is a few GOGs as well and those I may leave on the desktop so I don't become confused, forget them or whatever.

I made a post to my nephew on Facebook about this explaining that where i was a highly skilled and serious gamer I would have no problem knocking off these games in two or three weekends unlike mere mortals who require sleep that is for the weak, etc. He gets a real kick out of me being into games at all, both my nephews do. I guess i am supposed to be very serious and just read books and stuff since I am "old" in their eyes. I keep telling them some kids never grow up fortunately.

Are you crazy for downloading 100 games.

I feel so much better now seeing how many GOG games you have and I can just imagine how many are elsewhere. I only have 294 games there because I always just buy games one at a time and then play... oh, wait. No I don't. Never mind.

I just had a funny thought. I wonder if Windows 7 throws an error if you fill the entire screen with icons and then try to add just one more.

I think Worms WWP, Star Trek, and Fallout 1+2 are the only games I've ever paid full price so I don't feel so bad about it.

I take that back, I bought the Witcher 3 at full price. Sort of. It was like 40 something because I owned TWC 1 and 2.

I think Worms WWP, Star Trek, and Fallout 1+2 are the only games I've ever paid full price so I don't feel so bad about it.

I take that back, I bought the Witcher 3 at full price. Sort of. It was like 40 something because I owned TWC 1 and 2.

I do take some comfort in the fact that I have almost never bought anything when it was new. I have for ages been behind with a lot of stuff to play and just wait on prices to come down, sales, etc. so for very many games I have paid minimal prices, gotten various humble bundles, etc. just cherry picking the good stuff for dirt cheap. Even so, it adds up once you get into the hundreds of titles but it is nowhere near as bad as if I was buying all that stuff as it released. The cost would have been an order of magnitude higher had I done that which I couldn't have managed personally anyway.

Oh, and that unsightly mess of icons are gone now. I just kept the GOG ones which for this round of installs were not too many.

I also got a notice from my ISP letting me know I went over on bandwidth for the month and it is three strikes before they start charging me then explaining how in this exciting digital world I may want to consider upgrading my plan for higher speed and more bandwidth allowance. I do like Suddenlink. They have been reliable. No contract. The bill remains the same from month to month. The cost is reasonable and they are nice about it at least when you exceed what they offer in a given tier. This is in stark contrast to the likes of Comcast who I was stuck with in the past. I really couldn't stand those guys at all.

The last thing I bought 'new' was Star Wars The Old Republic super deluxe collectors boxed edition... only to be completely let down and bail on them after 3 months. Heh.

But I'm with you, I tend to have enough to keep me interested, that when things die down, I then can pick up great games are low cost. They may be 'old and dead' to many, but to me they are NEW and fresh. I just cant see myself paing more than $15 for any game nowadays.

Back to Windows On Mac